Choosing Abundance Rather Than Scarcity

Spare
Additional to what is required for ordinary use.
Give (something of which one has enough) to (someone); afford to give to.

After reading my friend Karuna’s blog I was left contemplating the word spare.
A line kept going through my mind:
Brother can you spare a dime?
Where have I heard this before. It’s from a song… but which one?”

According to Wikipedia
“Brother, Can You Spare a Dime?” is one of the best-known American songs of the Great Depression. 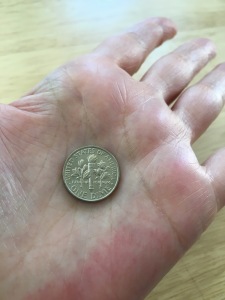 As I heard the line Brother, can you spare a dime? repeating itself in my head I started seeing images.

Brother/sister can you spare a dime?
Can I pause,
See beyond the outstretched hands
The tattered clothes
Plastic bags with personal belongings
The smell of urine or alcohol.

Find the eyes
Hold the gaze
See beyond the broken, missing teeth
Can I be in this moment.
Touch
Be with the part of me that feels fear
Has judgments
And wishes others were different.

Sister can you spare some kindness
Some care
Some time
Some food.

As if time and kindness were measurable,
rather than infinite.
Do I live in abundance and gratitude,
or in scarcity and judgment.

Political debates rage on as if poverty, lack of education and illness were the fate of some and their lack of willingness, rather than the responsibility of all. And the media colludes, constantly reinforcing the belief of scarcity, that there aren’t enough resources to go around, to touch, support, nourish every living being. Not enough to spare.

Can we pause and spare a moment to touch and remember our shared humanity?

Brother, can you spare a dime?
Some change
A smile
Some food
Some water

Some time
Some learning
Some work

Some shelter
Some comfort
Some kindness

Brother, can you spare a dime?

This site uses Akismet to reduce spam. Learn how your comment data is processed.